Major General David (1942) graduated from United States Military Academy in 1946 with a B.S. degree in Engineering and Military Science. He retired from active duty in 1977 after 31 years of service with the permanent rank of Major General.

Some of his assignments were: Assistant Division Commander,3rd Infantry Division, Germany, Commanding General, First Republic of Korea Army Detachment, Wonju Korea, Commander, US Army Training Center, Infantry, Fort Dix, NJ, Commanding General, US Army Base Command, Okinawa, and Assistant Deputy Chief of Staff for Logistics, Department of the Army, Washington DC.
He is one of only three people to be honored by the town of Lehighton with a large testimonial dinner.

Bert Alison David was listed in “Who’s Who in America” several times during the 1970s and he was also listed in “The National Register of Prominent Americans and International Notables” in 1976-77.

At the time of his death, his family established the “Major General Bert A. David award” at Lehighton Area High School, which gives an annual monetary award to a graduating senior. 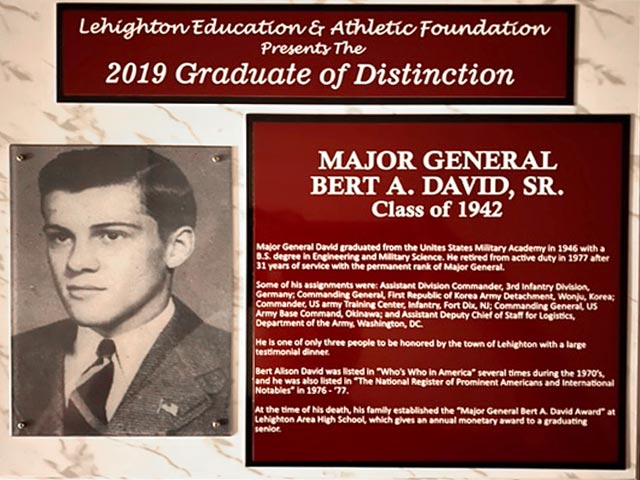