Houser Christman (1982) is co-owner of the Houser-Newman Associates, a full service vision/eye and surgery center with 3 offices serving Mahoning Valley, Nesquehoning, and Palmerton.

Houser Christman is a 1986 Graduate of Ursinus College and a 1990 Graduate of Jefferson Medical College. In 1991 she served an Internship at West Reading Hospital and in 1992 was the Medical Officer for Grenfell Regional Health services in New Foundland, Canada. In 1995 she completed her 3-year Residency at Wills Eye Hospital Ophthalmology in Philadelphia.

Dr. Angela has participated in a vision project with the Lions and Gnaden Hutten Hospital involving students in LASD who had failed eye exams but could not afford vision care. She provided glasses to these students at no cost.

She is an active member of the Lehighton Area Band Boosters Association, where she was a past Vice President and is currently serving as President.

Dr. Angela has helped many students interested in pursuing a career in medicine and ophthalmology by providing mentoring to those students both in the office and surgical Suite. 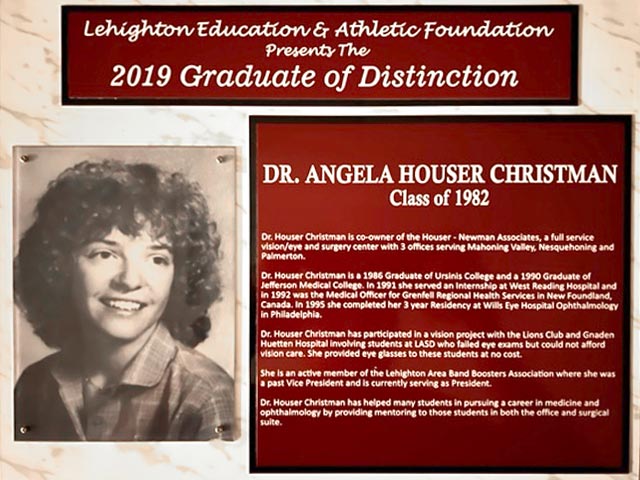